To the surprise of many, the Old Testament holds many prophecies that pertain to the end of days, the judgment, the new heaven and the new earth.  The prophets of the Old Testament not only warned those that were present in their day, but through the declaration “thus saith the Lord”, they proclaimed the fate of many nations, peoples, and gave an account of the end of days that very nicely aligns with the Revelation account yet adds more information.  Today there is a couple of things I’d like to point out from the prophecy contained in Isaiah 66.  This is a prophecy pertaining to the end time, the time where Yeshua reveals himself to all nations and tongues.  There is a distinct warning for us today, and clues to help us to avoid being consumed with fire at Yeshua’s return.  Let’s take a quick look:

“For, behold, the Lord will come with fire, and with his chariots like a whirlwind, to render his anger with fury, and his rebuke with flames of fire. For by fire and by his sword will the Lord plead with all flesh: and the slain of the Lord shall be many. They that sanctify themselves, and purify themselves in the gardens behind one tree in the midst, eating swine’s flesh, and the abomination, and the mouse, shall be consumed together, saith the Lord. For I know their works and their thoughts: it shall come, that I will gather all nations and tongues; and they shall come, and see my glory.” ~ Isaiah 66:15-18

You can see here that this is a warning not only for those in the time of the Old Testament, but for those that are living in the end time where all nations will see the glory of Yeshua.  There are two stark warnings for Christians today in this prophecy.  First:

This is an interesting description of those that will be consumed by fire together.  What does this mean.  Let’s look to what this tree could be that Isaiah is speaking of:

“And we are witnesses of all things which he did both in the land of the Jews, and in Jerusalem; whom they slew and hanged on a tree“ ~ Acts 10:39

“And when they had fulfilled all that was written of him, they took him down from the tree, and laid him in a sepulchre.” ~ Acts 13:29

“Christ hath redeemed us from the curse of the law, being made a curse for us: for it is written, Cursed is every one that hangeth on a tree:” ~ Galatians 3:13

“Who his own self bare our sins in his own body on the tree, that we, being dead to sins, should live unto righteousness: by whose stripes ye were healed.” ~ 1 Peter 2:24

You can see here, that the “tree”, and the “cross” are the same thing.  Here Isaiah is referring to those that gather to sanctify themselves with “one tree in the midst”.  Isn’t it fairly common today, that many Christian churches ensure that there is a cross (one tree), or an image of the cross in all of thier places of worship?  To further describe this group, Isaiah continues:

“eating swine’s flesh, and the abomination, and the mouse, shall be consumed together, saith the Lord“

So you can see that not only does this group gather to sanctify themselves with one tree/cross in their midst, but they also disregard God’s food laws by eating swine’s flesh, the mouse, the “abomination” which would include any and all unclean meats.  Is it coincidence that today the majority of Christianity disregards the food laws of God, and gathers for sanctification in a place that is most always marked with a cross/tree, or an image of the cross?  Some might say that these food laws have passed away, and that seems to be the “generally accepted doctrine” in Christianity today, yet a close look at scripture will reveal that this isn’t the case.  Some refer to 1 Corinthians 8 to say that the food laws are null and void, yet a close study of this text will reveal that this is dealing with meat sacrificed to idols, not clean and unclean meats.  Some refer to Romans 14 to say that the food law is void, yet a close study of this text reveals that this is an issue between those that choose to be vegetarian, and those that choose to eat meat.  Some use 1 Timothy to prove that the food law is void, yet 1 Timothy said the opposite describing the meat as “sanctified by the word of God”.  The only meat sanctified by the word of God (the bible) are clean meats.  Some use the story of the dream of Peter where he was prompted to eat unclean meats, yet the meaning of the dream became evident and Peter realized it’s meaning when he came to the house of Cornelius.  The dream didn’t make the food law void, rather it explained to Peter that the Holy Spirit could be given to the gentiles, not only the Jews.  Some use Colossians 2 to claim the right to eat unclean meats, yet here Paul is speaking to a group of gentiles living in a gentile city.  He says “let no man judge you in meat”.  The gentiles of the city ate all meats, so why would this group of gentiles be told “let no man judge you in meats” if they were permitted to eat all things?  A close personal study (free from the widely accepted indoctrination of the churches), will reveal these things and we encourage to study these issues for yourselves.  The end of this Isaiah prophecy includes another revelation:

“For as the new heavens and the new earth, which I will make, shall remain before me, saith the Lord, so shall your seed and your name remain. And it shall come to pass, that from one new moon to another, and from one sabbath to another, shall all flesh come to worship before me, saith the Lord. And they shall go forth, and look upon the carcases of the men that have transgressed against me: for their worm shall not die, neither shall their fire be quenched; and they shall be an abhorring unto all flesh.” ~ Isaiah 66:22-24 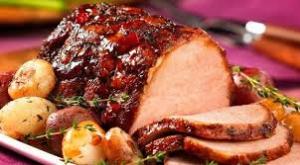 This includes another warning for Christians today.  The law has not passed away.  Here Isaiah warns of the future when all nations and people/all flesh will honor new moons and sabbaths and worship before him on these appointed times, and he mentions that all that have TRANSGRESSED AGAINST HIM will be dead.  If there was no law, there could be no transgression.  Yet today Christians believe that all law has passed away and all requirements of us are fulfilled.  This prophecy indicates otherwise.  Yeshua died to initiate the New Covenant where GOD’S LAW is WRITTEN INTO OUR HEARTS AND WE OBEY IT FROM THE HEART (Jeremiah 31, Hebrews 8), not so that the law could pass away.  Our transgressions were nailed to the cross, the law was not and failure to repent (change our way to His way) will lead to the second death:

“For if we sin wilfully after that we have received the knowledge of the truth, there remaineth no more sacrifice for sins, But a certain fearful looking for of judgment and fiery indignation, which shall devour the adversaries. He that despised Moses’ law died without mercy under two or three witnesses: Of how much sorer punishment, suppose ye, shall he be thought worthy, who hath trodden under foot the Son of God, and hath counted the blood of the covenant, wherewith he was sanctified, an unholy thing, and hath done despite unto the Spirit of grace?” ~ Hebrews 10:26-29

Remember that sin by biblical definition means the transgression of the law/commandments:

“Whosoever committeth sin transgresseth the law: for sin is the transgression of the law.” ~ 1 John 3:4

Remember Jesus’ warning to us about the commandments:

“For verily I say unto you, Till heaven and earth pass, one jot or one tittle shall in no wise pass from the law, till all be fulfilled. Whosoever therefore shall break one of these least commandments, and shall teach men so, he shall be called the least in the kingdom of heaven: but whosoever shall do and teach them, the same shall be called great in the kingdom of heaven.” ~ Matthew 5:18-19

We pray that all men recognize these warnings that have been given for those that live in the end of days.  Isaiah and all of the prophets by inspiration of God were faithful to warn us of these things.  Please prayerfully consider their testimony.

3 thoughts on “The Isaiah 66 Prophetic Warning for Christians Today”